Skip to content
Popular social media platform, Facebook has come under fire by two Non-Governmental Organisations for the recent discovery of trafficking of Cameroonian refugee children in Nigeria.
The Africans Unite Against Child Abuse (AFRUCA) United Kingdom and the Centre for Children’s Health Education, Orientation and Protection (CEE-HOPE) Nigeria have criticized Facebook following recent revelations that children especially girls were being trafficked from a refugee camp in Ogoja, Cross Rivers State, Nigeria after being advertised on Facebook. 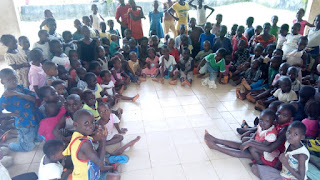 Sahara Reporters, one of Nigeria’s leading online publication in a recent major investigative report revealed that a certain Stanley Wantama used his Facebook page to upload photos of Cameroonian girls (who had fled the ongoing conflict in Southern Cameroon’s Anglophone region which displaced millions of people with several thousands staying in refugee camps across Southern Nigeria), advertising them. His victims, said the report, are mostly teenage girls between the ages of 16 and 17 years. In one of his posts cited, Wantama uploaded an image of a girl he claimed is “intelligent, hardworking and about 17,” and asked persons interested in hiring her as a maid to “inbox me.” After successful negotiations, he collects N30, 000 (about $82) on their behalf every month.
Sahara Reporters also revealed that he typically took the girls away after convincing the girls’ parents that he planned to put them in school in the hands of the employers, but he never did, rather he collected the salaries paid the girls, often giving them only pittances. None of the girls ever went to school but were given out and ended up in terrible domestic servitude with some eventually escaping. Meanwhile, he recruited more and more girls using Facebook. The reporter also visited the camps and spoke with victims and their parents to ascertain things for himself.
After observing the traffickers’ criminal activities (in which the reporter pretended to be a potential ‘buyer’ and in which Mr. Wantama negotiated transaction details with him), the reporter alleged that he made a complaint to Facebook through the normal channels, armed with the proof, mostly screenshots of the advertisement and the negotiation. But inspite of the weight of the crime which is a clear violation of Facebook’s policies against human trafficking, the reporter claimed that Facebook delayed in taking action until Mr. Wantama trafficked one more of his victims, 13-year old Glory. Against its policy of responding within 24 hours, the reporter, Facebook only acted, suspending Stanley’s Facebook account after 29 hours after he first reported, said the reporter, Philip Obaji (Jnr).
In reaction to the development and in light of alleged lapses on Facebook’s part, Debbie Ariyo, Chief Executive Officer of UK-based AFRUCA, an anti-child trafficking group, said………….
CEE-HOPE’s Executive Director, Betty Abah accused Facebook of a discriminatory approach in its response. ‘I can’t believe that Facebook would resort to a discriminatory approach as to how it responds to crimes against vulnerable children in the USA for instance, differently from how it does concerning hapless child refugees in Nigeria. I am at a loss as to why it would take virtually ages for Facebook to respond to the report in an age of lightning speed communication. How many of such cases have Facebook ignored because obviously they feel that the children are of no consequence? How many more of the Cameroonian refugee children or even Nigerian children have been traded off in this vicious web of modern day slavery using the social networking site because officials were negligent, nonchalant or out rightly indifferent?’ she asked.
The two organizations urged relevant agents in Nigeria to investigate the allegations and ensure that all perpetrators are brought to book. They also called on Facebook to investigate the case as well as tighten its safeguard mechanisms to ensure that crimes such as human trafficking are completely eradicated on its site.
In 2018, Facebook came under fire when news broke that its site had been used for the auctioning of a child bride in South Sudan. A 17-year girl, Nyalong Ngong Deng’had her photo put up, priced by several men and finally ‘sold’ for Ten Thousand dollars, 500 cows, three cars, two bikes, a boat and some mobile phones, the highest bride price paid in the war-torn country.
One of the five bidders was the deputy governor of Eastern Lakes state, according to statements by Sudanese human rights organisations including Plan International.
The ‘buyer’, a wealthy Sudanese business man, was three times her age. She became his ninth wife.
Though Facebook said it took down the post as soon as it learned of it, but that wasn’t until several days after Nyalong was sold and wedded.
The auction started October 25 but was removed by Facebook on November 9, 15 days later and six days after Plan International complained, stating that that was a violation of the site’s policies.
In reaction to the international backlash, Facebook denounced the action and promised to increase its safety policies. The social networking site said it had ‘zero tolerance for any type of trafficking and abuse especially of minors on the platform and work very hard to take decisive action as quickly as possible’. But like that of South Sudan, the recent action was again belated, until yet more harm had been done.
Nigeria on whose soil the trafficking occurred has a law against trafficking symbolized by the 2003 National Agency for the Trafficking of Persons (NAPTIP Act), amended in 2015.
‘These modern day slavery is completed unacceptable and Facebook should not allow its self to be a willing or unwilling partner in crime’, the groups added.
Written by Rosy Onuh

11 hours ago By Rosy Melody

You may have missed

11 hours ago By Rosy Melody

2 days ago By Rosy Melody

7 days ago By Rosy Melody